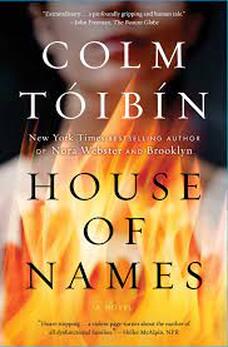 House of Names written by Colm Tóibín is a novel divided into three separate point of views. The first section of the book caught my eye the most, with the dramatic story about the mother's point of view in the events of which her daughter Iphigenia was murdered by her own father as a sacrifice for the war. Giving the circumstance, it was hard not to root for her throughout this story.
After the fact, she was driven with rage over the next several years while she planned out how she would murder her husband as she awaited his arrival home from the war.

​With the help of one of their prisoners, Aegisthus, her plan succeeded once the time came around and she had finally gotten the revenge she needed for the brutal loss of her daughter. This moment was made even more "emotional" considering how hectic the situation was when her daughter was killed and how she was unable to change her fate.

This novel revolves strongly around a woman's point of view and feminism considering how powerful Clytemnestra became after she had been through so much hurt over what Agamemnon had done to their family.
Powered by